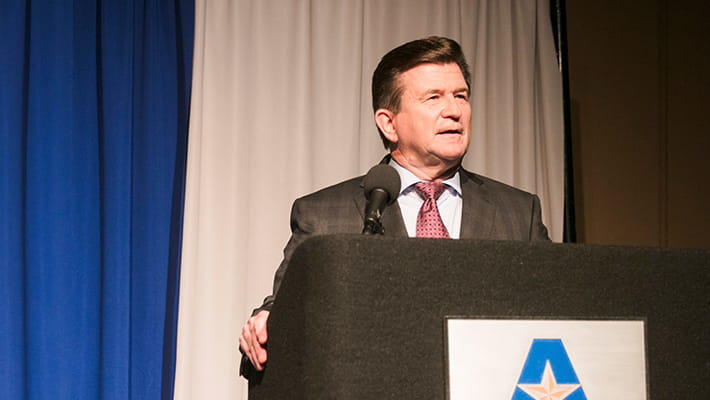 Harry Dombroski, a longtime Hunt Consolidated and Hunt Oil Co. executive, has been appointed dean of The University of Texas at Arlington College of Business. Dombroski is well known in the Dallas business community as senior vice president at one of the largest privately held companies in the nation.

“As an ‘out-of-the-box’ thinker and results-oriented leader, Harry’s contributions over his 30 plus year career with Hunt were essential to the growth and development of the Hunt family of companies,” said Ray Hunt, executive chairman of Hunt Consolidated, Inc. “Harry’s contributions were not just limited to critical financial processes but included virtually every aspect of the company’s activities, including leading several significant and innovative financing and business development activities.

“I believe that Harry has the skill set to become an absolutely outstanding dean of the UTA College of Business. Further, as a graduate of UTA, he has the ability to differentiate himself and UTA in the very competitive marketplace of higher education in North Texas.”

For over 30 years, Dombroski has overseen the development and implementation of critical financial processes at Hunt Consolidated, Inc. In addition to managing Hunt’s capital and investment decisions, Dombroski led several financing and business development initiatives, including the acquisition of Pacific Enterprise Oil Company, the approximately $1 billion expansion of the Company’s Tuscaloosa refinery and placement of $100 million corporate (HCI) revolver facility.

UTA President Vistasp Karbhari said the addition of Dombroski will give the College of Business a needed touchstone to the business community.

“The search committee brought a tremendous slate of highly distinguished and accomplished candidates to campus and I’m thrilled that we were able to recruit Harry Dombroski to be the next dean of the College of Business,” UTA President Vistasp Karbhari said. “Harry is a visionary leader who will raise the visibility of the college, enhance its stature through transformative advances and propel the College of Business into a position of international competitiveness while ensuring that it becomes the ‘go to’ place for business acumen globally.  We are located in one of the largest and fastest growing economies in the nation and our College of Business needs to be right at the center of this growth.”

A UTA alumnus, Dombroski will be returning to his roots and bringing his unparalleled business acumen and expertise to the College of Business.

Dale Petroskey, president and CEO of the Dallas Regional Chamber, said, “The University of Texas at Arlington has been producing talented and hard-working graduates for a long time, and now they’re entering an exciting new chapter with the selection of Mr. Dombroski as the new dean of the College of Business. The Dombroski era will be exciting for two reasons – it shows UTA’s commitment to modernizing how students are taught, and his extensive experience in the corporate sector will give students a real-world view of the business world and help them get off to a fast start in whatever field they choose.”

Dombroski is eager to begin his new position at the College of Business. With his extensive ties to corporations in the area, he looks forward to expanding UTA’s relationships with community partners. His multipronged approach to positioning the University as a nucleus of the Dallas/Fort Worth metroplex will benefit UTA students with increased opportunities for internships and career entry and will further leverage the scholarship and expertise of its faculty to being the thought leaders for the region and nation.

“It is always an intrinsic blessing to come full circle in one’s career. When I graduated from UTA in 1979, I was prepped and ready to enter the workforce,” Dombroski said. “The education that I received at UTA was the spark that fueled a long, rewarding career. I look forward to being able to pay that back to current UTA students and future graduates.”

UTA’s commitment to greater engagement with the corporate world, focus on being the very best through transformative changes and modernizing offerings based on the needs of the workforce was a key reason for his appointment.

“Harry doesn’t come from the traditional academic side of the house. However, he has been very engaged with our faculty and students over many years,” said Teik C. Lim, UTA provost and vice president for academic affairs. “Harry knows the desires of employers and how to match the rapid change of the industry. Bringing in a person with that firsthand knowledge will better position UTA amongst business leaders and help to serve our students with better opportunities after they graduate.”