The UT Arlington Trumpet Ensemble performs works from the growing repertoire of trumpet ensemble music. Under the direction of UT Arlington trumpet professor Dr. Rick Bogard, the group premiered works at the 2001 International Trumpet Guild Conference in Evansville, Indiana and the 2003 International Trumpet Guild Conference in Fort Worth, Texas. The trumpet ensemble performs music of a variety of styles and musical periods at concert and ceremonial functions on the UT Arlington campus. 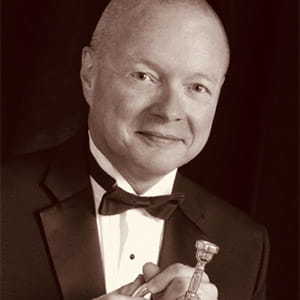 Bio: Rick Bogard has been heralded by the American Record Guide for his “... sweet tone quality; reliable in all registers, his pitch is excellent, and he plays with feeling.” In a review of his solo CD Trumpet Songs, The Journal of the International Trumpet Guild stated: “…brilliantly performs…displays an enviable purity of sound and an exceptionally consistent sense of lyricism as he weaves poetic lines that ebb and flow with expressive energy.” Bogard is a tenured Professor of Music at University of Texas at Arlington, where he has been on the faculty since 1990. He served the university as Chair of the Department of Music from 2012 to 2018. He holds a Doctor of Musical Arts degree in trumpet performance from the University of North Texas, a master’s degree from Baylor University, and a Bachelor of Music Education degree from the University of Central Arkansas. His teachers include Ronald Fox, Thomas Booth, John J. Haynie, and Leonard Candelaria. Bogard has been a member of the Dallas Opera Orchestra since 1989 and served as principal trumpet of the orchestra during the 1993-94 season. During his tenure with the Dallas Opera, he has performed on over 700 performances, including three world premieres and several recordings. He played first trumpet on Verdi’s Othello in the inaugural opera performance in Dallas’ Winspear Opera Hall. He has recorded Mahler, Shostakovich, and Respighi on six CDs with the Dallas Symphony Orchestra and participated with the DSO in opening concerts of the Meyerson Symphony Center in Dallas. Bogard was a founding member of the Dallas Wind Symphony (now Dallas Winds) and has been a member of the Arkansas Symphony Orchestra and the Waco Symphony Orchestra. He has toured with the Fort Worth Symphony Orchestra and has been a soloist with the Texas Wind Symphony, the UT Arlington Wind Ensemble and the UT Arlington Symphony Orchestra. Bogard has performed and held master classes throughout the United States and in Mexico, Canada, Italy, France, Germany, Russia, and Sweden. He has performed and presented at the International Trumpet Guild Conference, the MENC National Convention, Texas Music Educators Association Convention, the Texas Bandmasters Association Convention, and the College Music Society National Convention. Bogard has written an etude book for trumpet titled “Daily Warm-Ups and Skills Studies”, published by Gore Publishing Company. His 2002 Research Enhancement Grant from the University of Texas at Arlington produced a solo CD, Trumpet Songs. (Centaur Records) Rick Bogard is currently an Artist/Clinician for the Vincent Bach trumpet division of the Conn-Selmer Corporation. His bio is included in David Hickman’s book “Trumpet Greats”, a biographical compendium of 2,212 important trumpeters since the year 1542. Rick lives in Dallas with wife Kathy and shih-tzu Katie, where he is an avid but mediocre golfer.