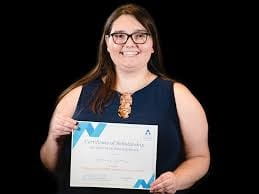 A UTA team of Social Work, engineering and business students who designed an app to help wheelchair users at airports has been advised to take their invention to the reality TV show Shark Tank to secure venture capital.

The UTA team and their app, called the WheelTrip, was among three university finalists in the “Federal Aviation Administration Challenge: Smart Airport Student Competition.” The national competition announced its winning college team on Dec. 1.

Purdue University of Indiana won the FAA Challenge and the $25,000 cash prize. There were no additional awards.

Still, the UTA team’s entry was a favorite - at least with one of the challenge’s seven judges. During a question-and-answer session about the app, that judge didn’t withhold his admiration.

“All that judge said, when it came to his turn, is ‘Y’all need to go on Shark Tank’,” said Glover, who graduated with a Master of Social Work degree in August but continued competing as a member of the UTA team. “That was amazing! Just to hear that from a judge, that was really amazing.”

“He was actually very serious about it,” she said.

Glover’s team will not be appeal to the “sharks” on the Emmy-Award winning, entrepreneurial-themed, ABC television show. The WheelTrip is not 100 percent ready for prime time, she said.

But the team did find an alternative means to heed the judge’s advice.

This month, they pitched the WheelTrip as a new business idea in the $15,000 Maverick Entrepreneurial Program and Award contest. The contest is sponsored by the colleges of Engineering and Business and is held on the UTA campus. Winners were announced Dec. 3.

“We were one of three Second Place winners,” said Glover, who now works at a memory care facility in Fort Worth. “We were happy that we, at least, won something!”

Glover and her team of student engineers and business majors designed the WheelTrip app after they researched growing frustrations among millions of air travelers – particularly older adults - who use wheelchairs.

“Many airports do not support an environment that allows older adults to travel by plane with friends and family, leaving them to miss out on opportunities to go places that you might not necessarily be able to get to by car,” said Glover, whose study is titled Age-Friendly Airports: A Qualitative Study of Older Adults Aged 55 and Older.

Glover’s research concluded that, contrary to some assumptions, aging adult travelers use technology, including apps, in various aspects of their travel journeys. They also want to see increases in technological advances in airports in the future, she said, according to her research.

Based partly on her research, the UTA team designed the WheelTrip app for entry into the Smart Airport competition.

The FAA hosted the 2020 competition, its inaugural contest, to encourage college students to design technology to improve travel in the nation’s airports.

The 2020 challenge drew 12 teams from across the country. Last January, UTA was named one of three finalists. Purdue and the University of North Dakota rounded out the group of finalists. On Nov. 30, finalist teams submitted a digital poster and technical paper and presented a virtual demonstration to a steering committee of seven judges at the FAA’s William J. Hughes Technical Center in Atlantic City, N.J.

The WheelTrip app was designed to alleviate frustration among millions of air travelers who use wheelchairs. According to the UTA team’s research, 65 percent of persons with disabilities have had challenges getting through the nation’s airports.

“The differently abled population often reports having an unpleasant airport experience,” the team’s research concludes. “For the almost four million Americans requiring a wheelchair, navigating the airport is not an easy task, and many wheelchair assistance companies receive poor reviews.”

The WheelTrip stood out among judges because of its functionality, Glover said. “Most of the feedback we received was very positive,” she said of judges, who included leaders in the FAA organization and in the national Department of Homeland Security.

Perhaps the team should pitch the WheelTrip app to the “sharks” after all.