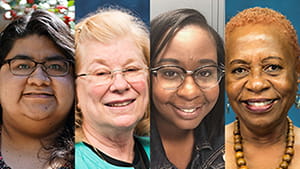 The School of Social Work honored four staff members this month with an award for outstanding service to the university, peers and the Arlington community.

The four staff members earned the School of Social Work’s “Going the Extra Mile,” or the GEM, Award for offering service above and beyond their job requirements.

Nelda Lawson, the School’s manager of administration and operations, announced the recognitions on Tuesday, Dec. 22, during a virtual holiday gathering of Social Work employees. More than 75 faculty and staff members tuned in for the online event, which included a farewell recognition for a staff member who retired, a trivia game, Ugly Sweater contest and a live cooking show.

“Congratulations and thank you for all that you do,” Social Work Dean Scott Ryan told the GEM honorees prior to Lawson naming them. Each of the honorees will receive $1,000.