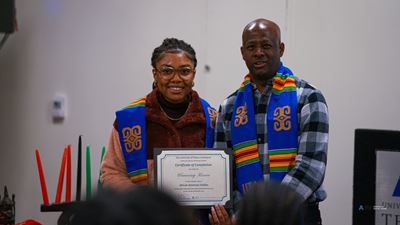 Nearly 60 undergraduate students, many of them members of the UTA chapter of the NAACP and of Greek-letter fraternities and sororities, packed into a lecture Wednesday on campus to understand more about the cultural holiday Kwanzaa.

“I knew nothing about it,” said Devien Davis, a sophomore and member of UTA’s track and field team. “I thought it was a ‘Black Christmas’.”

“I’m a very religious person. Christmas has a way deeper meaning,” said Davis, 19, who recently became a member of Alpha Phi Alpha Fraternity. “I always thought ‘How could you celebrate both’?”

Wednesday’s Kwanzaa lecture and celebration were part of an “Afternoon of Arts & Letters.”  The event was jointly hosted by UTA’s Center for African American Studies and the student chapter of the NAACP. It was held in the Guadalupe Room of the E.H. Hereford University Center on campus.

Kwanzaa often is mistakenly believed to be a spiritual or religious celebration. In fact, it is a cultural observance of common values shared by people of African descents in the United States and abroad.

Kwanzaa is celebrated for seven days, beginning each year the day after Christmas, Dec. 26, and continuing through Jan. 1. On each day, a principle – unity, self-determination, collective work, cooperative economics, purpose, creativity and faith – is observed by focusing on what families can do to bring about or hold true to that value.

In 1966, Dr. Maulana Karenga, an American activist and longtime chair of the Africana Studies Department at California State University Long Beach, created Kwanzaa following the sudden loss of lives and devastation of property during the Watts Riots.

The six days of uprisings in Watts, a neighborhood in South Central Los Angeles, the year before, in August of 1965, saw bloody clashes between police and African Americans protesters. Blocks of businesses and buildings were torched as many Black Americans objected to the poverty, hopelessness, unemployment and lack of basic services in inner city Los Angeles neighborhoods.

Dr. Karenga intended the observance to encourage Black Americans to embrace pride in their own communities and to celebrate their own unique traditions. He intended much of the symbolism of Kwanzaa to reconnect African Americans culturally to their roots in West Africa.

“In 1966, we were deep in the Civil Rights movement,” Dr. Hill said during Wednesday’s presentation. “What Dr. Karenga did is he decided to create an African American cultural celebration.”

Dr. Karenga is a personal friend of hers – and her mission, or purpose, is to teach Kwanzaa traditions to students, some of whom she said have misconceptions about African culture and others who shun the traditions altogether.

During Wednesday’s event, Dr. Hill asked the group gathered how many had ever celebrated Kwanzaa in their homes. Few raised their hands. “After this, you will be encouraged to do so,” she said.

The event included explanations of the seven days – and corresponding red, black and green candles – of Kwanza; an explaining of the symbols of a cobb of corn, a place mat, fruit and nuts, the candleholder and gifts.

Dr. Hill led the group through an understanding of the Swahili chants used during each night of Kwanzaa observances. She offered practical way to celebrate the observance.

Mykayla Carson, a sophomore who is a public health and pre-med major, said she had little understanding of Kwanzaa before Wednesday’s lecture and observance.

She plans to share her newfound knowledge with family members and will ask them to celebrate Kwanzaa this year with her.

“This is my first experience with it. I enjoyed it,” she said. “It’s definitely going to get me engaged with the culture.”