Dr. Pranesh B. Aswath was appointed as provost and vice president for academic affairs, ad interim, effective May 2020.  He joined the University of Texas at Arlington in 1990 as a Professor of Materials Science Engineering.  He served as associate dean for graduate affairs in the College of Engineering from 2013 to 2016 and senior vice provost for academic planning and policy starting in 2016.

In addition to bringing a diversity of relevant experiences in academic operations, initiatives and planning, and collaborations with UT System’s Academic Affairs Office, Dr. Aswath has an extensive three-decade record of teaching and research as a materials science and engineering professor and an international authority in processing and properties of advanced materials.  He was the recipient of a Fulbright Faculty Fellowship, is a Fellow of both the American Society of Materials International and the Society of Tribology and Lubrication Engineers, and was recently selected as a Senior Member of the National Academy of Inventors. 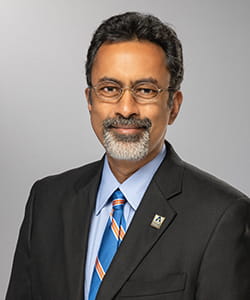