Dr. Tamara L. Brown joined The University of Texas at Arlington (UTA) as provost and senior vice president for academic affairs on August 1, 2022. As provost, Dr. Brown leads academic programs, degrees and initiatives across the University’s ten colleges and schools as well as the Libraries, Division of Student Success, Division of Faculty Affairs, Division of Academic Planning and Policy, Division of Academic Personnel, Center for Mexican American Studies and Center for African American Studies. She is committed to promoting and achieving academic excellence at one of the most diverse campus populations in the nation, consisting of almost 60,000 students each year.

Dr. Brown came to UTA from the University of North Texas (UNT), where she served as executive dean of the College of Liberal Arts and Social Sciences for three years. In that position, she was responsible for the largest college on campus, consisting of 9,000 students and more than 22 academic departments and programs.

Prior to her time at UNT, Dr. Brown was interim dean of graduate studies from 2018-19 at Prairie View A&M University. From 2012-18, she served as dean and professor of Prairie View’s College of Juvenile Justice and Psychology and executive director of the Texas Juvenile Crime Prevention Center. From 1999-2012, she was an assistant professor and then associate professor of psychology at the University of Kentucky.

Brown earned her doctorate and master’s degrees in clinical psychology from the University of Illinois and a bachelor’s degree in psychology from Longwood College. She also has a master’s of divinity from Asbury Theological Seminary. 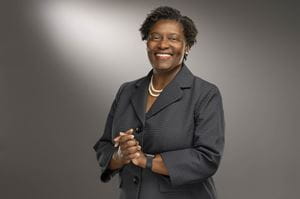