Researchers from the School of Social Work turn the spotlight on forgotten communities.
By Sarah Bahari

Nine refugee camps blanket a stretch of the border between Thailand and Burma.

In the past decades, the Karen people have fled to these camps to escape war and religious persecution. Yet the area is soaked in squalor. Bamboo roofs sit atop overcrowded shanties. Food and medical care are scarce. Violence is a part of life.

Many will never leave. Yet others are granted refugee status in countries around the world, including the United States. Resettlement can bring its own stress, from language barriers and culture shock to lack of employment and financial worries.

Despite this, mental health care options for Karen refugees and others are severely lacking. But a professor at The University of Texas at Arlington hopes to change that by studying how we can provide critical mental health care to refugees.

“When refugees arrive in the United States, they are at their most vulnerable. They have experienced the worst of what the world has to offer,” says Diane Mitschke, an associate professor of social work. “We have an obligation to support and help them. As social workers, we are uniquely qualified to help shape the care they desperately need.”

Dr. Mitschke’s research is part of a growing body of work at UTA aimed at reaching historically underserved communities and populations. In addition to refugees, researchers are studying American Indians and adolescent mothers to gain insight into these groups, which have long been ignored by society—including academia.

“Through research, social workers bring attention to the issues and causes of social and economic injustices affecting marginalized, disadvantaged, and underserved populations,” says Scott Ryan, dean of the School of Social Work. “Using evidence-based research, we are committed to the guiding themes and principles outlined in UTA’s strategic plan by finding solutions that improve the health and human condition and that help sustain urban communities like the Dallas-Fort Worth Metroplex.”

Hser Gay Paw was just 9 years old when her family fled Thailand for the United States.

She remembers her parents struggling to understand how to complete the piles of paperwork, how to pay bills—even how to adjust to American foods.

“Assimilation can be so hard,” says Paw, who was a Karen refugee and is now a freshman at UTA. “It takes a toll.”

As a teenager, Paw began volunteering as an interpreter at the Agape Clinic in east Dallas, which provides health care for underserved populations such as refugees and undocumented immigrants. That’s where she met Dr. Mitschke, a volunteer who had begun to take a research interest in the mental health of refugees.

Mitschke noticed a look of shock among new refugees as they tried to navigate daily life in the United States, and she wondered how she, as a social worker, could help.

Given the stakes, that question is critical. Roughly 3 million refugees have resettled in cities and states across the country since 1980, bringing diverse beliefs and cultures.

“As a whole, they are an incredibly resilient group of individuals who continue to have hope for the future,” Mitschke says. “The more we can do to help them thrive in the U.S., the more likely it is they will become productive members of society who enrich our communities through their cultures and ideas. We are all the better for it.”

To begin, Mitschke reached out to Catholic Charities in Fort Worth, which works with refugees from around the world, and developed a study to evaluate different delivery methods of mental health care.

For eight weeks, refugees from Burma, Burundi, the Democratic Republic of Congo, Rwanda, and Bhutan received one of three counseling methods: office-based, home-based, and peer-based community. Forty refugees participated in each.

“Our results were very encouraging,” Mitschke says. “A peer-based, community model, which would be the most cost-effective, has enormous potential to treat PTSD and other issues. This helps us develop new, innovative ways of providing mental health care for underserved populations.”

Mitschke’s work with refugees continues. In another project, she is collaborating with Beverly Black, UTA’s Jillian Michelle Smith Professor in Family Violence Research, to promote healthy relationships and prevent relationship violence among adolescent refugees. Most recently, she worked with a graduate student to study the impact of spirituality and religiosity on mental health among Syrian refugees.

For Paw and other refugees, Mitschke’s work has provided a catharsis.

Some 60,000 American Indians from 174 federally recognized tribes call North Texas home. Yet little is known about this population, including their medical, social, and cultural needs.

In fact, nearly all of the existing research on American Indians focuses on those who live on reservations, even though three-quarters of the population now lives in cities and urban areas such as North Texas.

Working with the Urban Inter-Tribal Center of Texas, an interdisciplinary group of UTA professors designed a study to unearth such data, which will not only help the center provide more targeted services, but also apply for federal, private, and state grants to improve the health of its members.

“The United States has an obligation to provide health care to American Indians based on the history and treatment of its people,” says Paul Conrad, an assistant professor of history. “But we found there are many needs not being met.”

In addition to Dr. Conrad, the team includes Maria Scannapieco, director of the Center for Child Welfare in the School of Social Work and a Distinguished Professor; Barbara Raudonis, associate professor of nursing; and Kelly Visnak, associate librarian.

The researchers first led a series of three focus groups with 41 participants. Based on those discussions, they developed a needs assessment survey, which they handed out at powwows and cultural events around the region. They received 370 replies.

“The bottom line is the American Indian community has a great need for culture-specific care and programs,” Dr. Scannapieco says. “It is very difficult to apply for and win grants without showing data. We hope the Urban Inter-Tribal Center of Texas can use this data to meet some of these needs.”

Conrad adds that the report also seeks to provide a deeper sense of understanding about a community that is critical to our nation’s history. “We live on what was once native land, and I think it’s important to have a better sense of who the American Indians are in North Texas. We view this project as the start of an ongoing relationship with this community.”

Cheryl Anderson first read about psychological birth trauma in medical literature a few years ago. Defined as a form of mental or emotional distress suffered by some mothers following childbirth, it can materialize into depression or PTSD.

Dr. Anderson, an associate professor of nursing with a background in maternal health, posed a question: “If a grown woman can experience psychological birth trauma, what about a 14-year-old girl?”

Working with the county hospital of Fort Worth, she and her team interviewed more than 300 women between the ages of 13 and 19. Their interviews indicated that young women can be particularly susceptible to fears of dying, loss of control, uncontrolled pain, and limited support during labor, all of which have been associated with symptoms of traumatic stress.

While mining the results of the research, Anderson noted that nearly three-fourths of the young mothers they interviewed were Hispanic, not surprising given Texas’ demographics (nearly 40 percent of Texas residents are Hispanic or Latino, according to the U.S. Census Bureau). Birth rates for young Latinas are higher than any other group—38 out of 1,000 compared to 23 out of 1,000 for the rest of the population—so Anderson wanted to explore birth trauma for this ethnic group.

She and her team analyzed a small sub-sample of the Hispanic mothers, 66 in total, using a tool that measures acculturation, or the process in which a person from one culture adopts the practices and values of another culture. They found that immigrants with less acculturation showed a higher likelihood of experiencing symptoms related to birth trauma, possibly enhanced by a language barrier or lack of support system.

Anderson believes further research is needed on all adolescents, including Hispanics, and psychological birth trauma. “Adolescents can be particularly vulnerable to suffering traumatic birth experience, and health care providers should monitor symptoms immediately after birth, as well as several months following hospital discharge. i 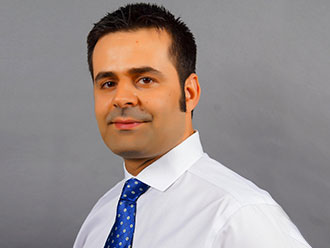 Power grid optimization problems are known to be computationally extensive, but researchers at The University of Texas at Arlington are... 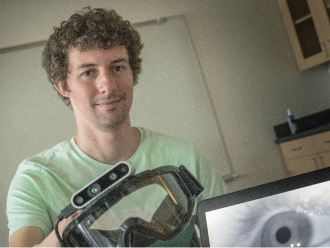 Revolutionary eye-tracking technology invented at UTA will allow users to navigate electric wheelchairs and other mobile platforms without their hands.... 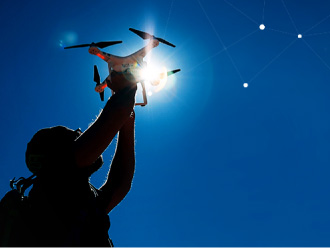 The Sky's the Limit

The Sky's the Limit Unmanned aerial systems are changing the way we gather information, do business, and respond to...