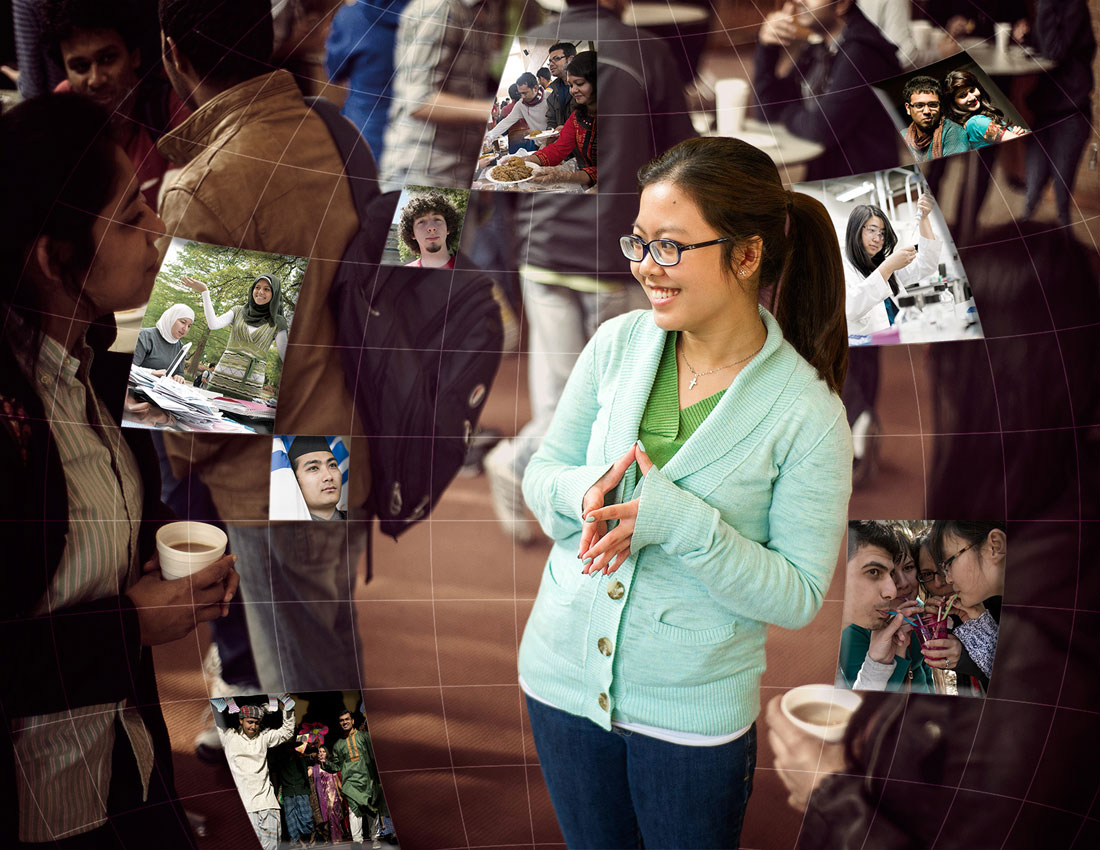 All In Above: Senior Tram Cao of Vietnam has immersed herself in all things UT Arlington.

Tram Cao, vivacious and determined, leans forward at a table in the E.H. Hereford University Center as she talks about her many activities and plans. The Vietnam native heads the organization, a position she never imagined she would even want. But Cao’s UT Arlington experience has been transformative—and much of the shift occurred outside the classroom.

“Many international students, especially those at the graduate level, choose UT Arlington for the opportunity to work closely with world-class researchers and scholars,” says Ronald Elsenbaumer, provost and vice president for academic affairs. “Together they explore solutions to some of the world’s most pressing problems.”

Cao, one of about 1,000 undergraduate international students, says she was attracted by the University’s diversity. She wanted to meet and work with people from different ethnicities.

Global Focus: Souvik Dubey, right, and Fahad Mirza enjoy a mini-jam session while taking a break from their research.

Souvik Dubey, an electrical engineering Ph.D. candidate, is among the two-thirds of UT Arlington’s international students pursuing graduate degrees. He’s developing a chip that can be implanted in the stomach to treat gastroparesis, a disorder that slows or stops food from entering the small intestine. He works alongside renowned researcher J.-C. Chiao in the Electrical Engineering Department.

“I was looking for interaction with large numbers of people, to come over here and learn the culture,” Dubey says. “I was also closely following Dr. Chiao’s research in medical electronics. The infrastructure that UTA has to perform high-quality research is commendable.”

UT Arlington students hail from nearly 120 countries. Dubey is one of 1,289 students from India, which sends more scholars here than any other nation. China is next at 262. Nepalese student Sunil Sahi, who’s pursuing a doctorate in experimental physics, says he was attracted by both the academic possibilities and the generous financial assistance. Sahi knew all along he wanted to do graduate work in the United States.

“The education here is one of the best in the world,” he says.

He works with physics Professor Wei Chen to create reasonably priced radiation detection materials for use in border security and other areas. The materials available now are almost prohibitively expensive, he says.

Sahi had never been to the United States before arriving in 2010. “It was totally different—the infrastructure, the university culture,” he says. “Back in Nepal, we don’t have freeways.” Nepalese students from the Physics Department met him at the airport and found him a place to live.

Dubey’s biggest surprise was the weather.

“I didn’t expect Texas to be that hot,” he says, adding that the climate is actually similar to India’s. Two of his friends were UT Arlington students, and they helped him adjust.

Cao already was accustomed to life in America when she came to campus in 2010. She left Ho Chi Minh City at age 15 and moved in with her aunt in Houston to attend a small private high school. The transition to UT Arlington and its 38,000 students was challenging.

“I was totally by myself, staying in a room with someone I had never met before,” she says.

She decided to get involved in campus life, first participating in residence hall activities, which helped her meet people. She became good friends with a resident assistant who encouraged her to stay active.

In addition to her responsibilities as International Student Organization president, she helps teach a diversity and social justice workshop. The lesson plans cover gender and religion differences, as well as practical matters like hand gestures that may be interpreted differently between cultures.

Cao credits UT Arlington’s activities, coupled with her willingness to join in, with transforming her college experience. She says she went from being shy and quiet to finding her niche as a public relations and advertising major. She wants to be an events coordinator after she graduates in December.

“It really changed me, my experience at UTA,” she says.

Jay Horn, executive director of the University’s Office of International Education, says international students typically have a three-month “honeymoon phase” before the reality of how to succeed in another country sets in. His office paves the way by providing information on obtaining visas, getting immunizations, what to bring, and how to find housing.

“We integrated international student orientation into New Maverick Orientation,” Horn says. “We hope it will continue to improve connections between international and domestic students.”

Cao spent much of the spring semester preparing for International Week, which brings together UTA’s 20 international student organizations for a parade, food fair, fashion show, talent show, and soccer tournament. The popular event is open to the community, and area elementary and middle schools are invited to gain exposure to other cultures.

Other campus activities with an international flair include Global Grounds, a biweekly gathering featuring coffee, chai tea, and snacks. The International Student Organization often hosts Saturday cookouts at area parks. Cao says the group is about 60 percent Americans who got involved because they wanted to expand their horizons.

Similarly, Dubey prefers to make friends from countries other than India. “Cultural exchange makes me very happy,” he says.

Another offering, The Link: International Friendship Program, pairs students with area families. The Office of International Education connects the parties and encourages them to meet once a month for coffee, meals, or outings.

Just going to class can be an international experience.

“Our lab is a multicultural group—Chinese, American, Iranian, Indian,” Sahi says. “I have friends from a lot of different communities now.”

Though she has an apartment now, Cao strongly recommends that new international students live in the residence halls. “They get to learn more about American culture and get more involved in school.”

And, perhaps, undergo a life-changing experience.

“None of us knew how to make a turkey, so we made food from our own countries,” says Vicky Teherani ’79, ’81. “It was a wonderful feast.”

The Thanksgiving spread she describes was a common scene in the 1970s.

“International students deal with language barriers and homesickness. It sort of forced us to form bonds with each other,” the Hong Kong native recalls. “We could understand each other better than we understood our American friends, even if we spoke different languages.”

As Teherani became more involved in campus life, she sought ways to acclimate to American culture. The University was smaller then, and far fewer students lived near campus.

“Foreign students at UTA today benefit from a campus that really enhances the student experience,” she says. “The new student has more opportunities to comingle with American students, too.”

Still, Teherani found her niche, forming a close circle of friends that felt more like family. One actually became family. She married Siroos Teherani ’81, an India native she met in graduate school. Vicky and her first roommate, Hong Kong native Wendy Yau ’79, are still close, and she keeps in touch with many others.

After earning her MBA, Teherani spent 14 years with Belo Corp., where she was the first female officer, and nine years with PAJ, a global jewelry wholesaler. Today she owns VT Capital. She serves on the UT Arlington Development Board and, with Anson Chan, founded the Asia Scholarship Endowment, which supports international diversity.

“My UTA education gave me a strong foundation to be competitive in the workplace,” Teherani says. “I am inspired to be as good as or better than the next person because of it.”

Next Story
Into the Arms of Technology