Bob Woods is telling the story of how the UTA racing team became the legend it is—tops in the state, tops in the region, ranked first in the nation and fifth in the world. It’s 1978, Dr. Woods recalls, and he’s a young mechanical engineering professor and reluctant adviser to a car-constructing racing team. He’s at a Mini Baja competition in Phoenix where it’s hot and sticky, and he’s watching dune buggies bounce over small, undulating hills, some of them zipping past his head at what feels like warp speed.

Suddenly a UTA team member runs toward him, shouting about breaking a chain with no master link to fix it and how he has to bow out. As the student screams at the top of his lungs, Woods fears he’s about to leap in front of one of the moving cars and end his misery.

Langston takes a spin on the track.

Then something miraculous occurs.

A competitor walks up and says, “Here, take ours.”

And that’s the man’s last one.

“Something snapped in me,” Woods says. “I was looking at this all wrong. It’s car against track, not team against team. That mentality of a bigger goal than you and me was inspiring. From there, I became obsessed with the whole thing. I was hooked.” 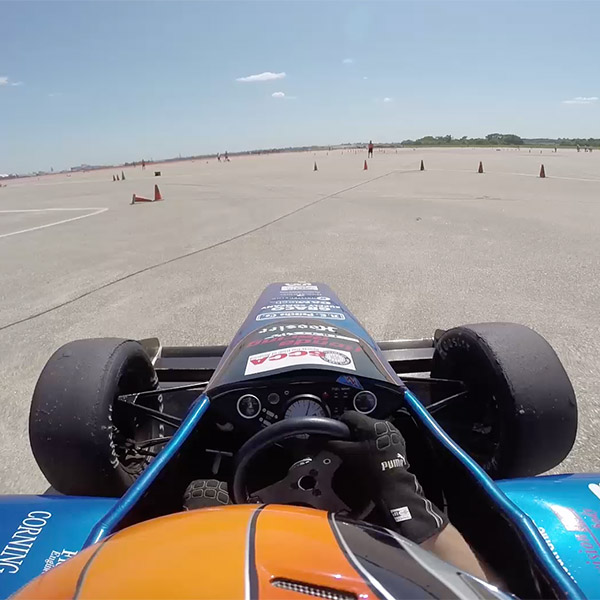 “It’s close to midnight, the car is jacked up on stands, and I’m upside down soldering this board onto the car. All I’m thinking is, ‘This is nuts.’”

Obsessed. Hooked. Ask any member of UTA’s Formula SAE Racing Team, former or current, and he or she blurts out the same lines, in the same way, as if part of a script. Sure, the program is about racing cool cars really fast. And while a large chunk of that is the bait, the actual challenge of building a race car from scratch delves deeper into the psyche of a student engineer as a battle against uncertainty.

Why else would students already saddled with heavy course loads spend so much time at Woolf Hall designing, testing, prototyping, building, and eventually racing these cars—for no pay? If you’re not working at least 40 hours a week, you’re slouching. You’re certainly not obsessed; not really hooked.

“It infects everyone who is a part of this department,” says Amit Kudtarkar, who averaged slightly more than 80 hours a week last year as team captain. He’s the business manager now. “I can’t tell you why there’s such a passion for it. Once it infects you, it completely consumes your life.”

The mojo of UTA’s Formula SAE Racing Team isn’t necessarily its wild success, although trying to outperform last year’s team is a driving force. It’s a tradition that deepens with every new contingent charged with building a new car for a new race.

Wide-eyed candidates number about 60 each year, only to be whittled to an insanely dedicated two dozen or so. Each season begins with Woods’ Yoda-like advice: Approach the complex task of designing and building the car with simplicity.

“Every year we try to come up with three innovations and leave everything else alone,” he says.

Improvements have included combined clutch and shifters, electronic fuel injection, and last year’s move to four on-board computers that make the car respond more quickly. “The idea is to continue doing what you do well and push the envelope on everything else.”

Like an all-electric vehicle the team plans to unveil April 25. It will be the first UTA Formula car to compete in both the United States and Germany.

Formula SAE competition lasts an intense three days and begins with a defense of the car’s engineering design and presentation of a detailed business plan, including a manufacturing outline, cost report, and marketing strategy.

On day two, cars hit the road, competing in a 70-yard drag race, the figure-eight skid pad, and autocross. The final day is a 12-mile endurance test where you can’t make adjustments or even refuel. Usually half the cars drop out due to overheating, engines spewing oil, or broken suspensions or other parts.

As adviser, Woods can point his Formula fanatics in certain directions but otherwise must be hands-off; rules stipulate a student-only endeavor. He downplays his role in the dynasty, giving credit to everyone but himself as though for nearly 40 years he has been merely a traffic cop.

UT Arlington’s Formula SAE program has a storied history. Here's a look at some of the highlights.

UTA launches its racing program with the construction of a Mini Baja off-road vehicle.

UTA enters Formula SAE competition for the first time and wins its class.

The team uses a design emphasizing space efficiency and simplicity, earning the Best Design Award and second place overall despite a transmission failure.

The team enlists art student Richard Pelitier, and the car wins numerous awards for design. Due to engine overheating in the last lap, it drops from first place to eighth at nationals but ends up being displayed at several museums, including the Motorsports Hall of Fame of America in Novi, Mich.

UTA demonstrates its championship car for racing legend Mario Andretti at the Fort Worth Museum of Science and History’s premier of the IMAX film Super Speedway.

The program celebrates its 30th anniversary by displaying 20 of its cars. UTA is among the few teams that preserve cars rather than scrapping them to build new ones.

The team designs an electric-powered car.

A car guy and fairly accomplished drag racer from a small Oklahoma town, Woods discovered mechanical engineering and eventually earned a Ph.D. from Oklahoma State University. In 1977, after his third year at UTA, a student group approached him about advising its racing team.

It was fine with him as long as he didn’t have to do meetings or babysit anyone or even attend competitions. “I really didn’t help them a whole lot,” he confesses. “But the racing part of it did seem fun and exciting.” After his aha moment at the Mini Baja race in Phoenix, Woods rolled up his sleeves and went to work. In 1983 UTA captured its first win in Formula SAE and went on to dominate the competition. The team has won more titles than any other school, and that includes universities from Canada, Germany, South Korea, and Austria.

“You can sit in a lecture all day long, but the real learning is when you do something yourself in some practical, theoretical way,” Dr. Armanios says. “Dr. Woods is able to attract these students to something that is, frankly, quite time-consuming and challenging. It’s not easy, but they make it look easy.”

Success is a matter of approach. Many schools see Formula SAE competition as senior design projects. At UTA it’s a lifestyle. Anyone willing to put in the time can join, including non-engineering majors.

“If you limit the experience to seniors, they cannot learn enough in one year to do very much,” Woods says. “There’s so much to learn about race car design and tuning that it takes several years to be able to understand the systems well enough to contribute in a significant way.”

That’s why UTA offers a well-oiled mentorship that passes crucial information about fabrication, design, driving, and administration from one team to the next, helping newbies grow into the work. And instead of limiting progress to fall and spring semesters, UTA never stops. Summers at Woolf Hall are just as busy as any other time.

TRICKS OF THE TRADE

The first day electrical engineering junior Naima Rivas asked about the group, she found herself working on a hybrid car just days before a competition.

First: Michael Hibbard solders on a circuit board in the team’s electronics lab. Second: David Campbell, left, and Ravi Soni inspect a carbon wheel in the composite fabrication lab.

“It’s close to midnight, the car is jacked up on stands, and I’m upside down soldering this board onto the car. All I’m thinking is, ‘This is nuts.’ Safe to say, after that I was hooked.”

Now Rivas heads the team responsible for wiring the vehicles and doubles as project manager for the electric car. The racing team is run like a corporation, with a president, a team captain, a chief engineer, etc.

“They learn to work as a team and on a schedule, work on a budget, make compromises, deal with personalities,” Woods says. “It’s great to know theory from textbooks, but in reality they have to work on a team when they get in the industry and rely on one another. That’s what we teach them.”

Woods says that once engineering students graduate, it typically takes a year for companies to shape them into engineers. But a student involved with Formula SAE “graduates as an engineer.”

Alumnus Erick Kohler, who analyzes gearbox cases, gears, bearings, and driveshafts for Bell Helicopter, says he had an advantage over other graduates when he left the team in 2007.

“Dr. Woods was right that it takes about a year for engineering students to gain the amount of experience and engineering sophistication we had on day one.”

Distinguished Alumnus David Hunn also hit the ground running after receiving a Ph.D. in 1992. He was on two Mini Baja and Formula SAE teams. Now chief engineer and technical director for the Ground Vehicle product line at Lockheed Martin, he says the experience teaches engineering, sure, “but more importantly, it taught us leadership, built our self-confidence, and tempered us with humility, which I’m convinced are the foundations of a successful professional career.”

Ask Woods about his gushing alumni and he smiles, saying how his “trick” works every time.

“I get them all interested in race cars and then teach them a whole bunch of engineering and professionalism,” he says. “If I said, ‘Let’s design a chair,’ how many would stick around and stay all night? But they would learn the same things.”

Going Greek Membership in a Greek organization is for life. Can it also inspire lifelong Mavericks? Generations of fraternity