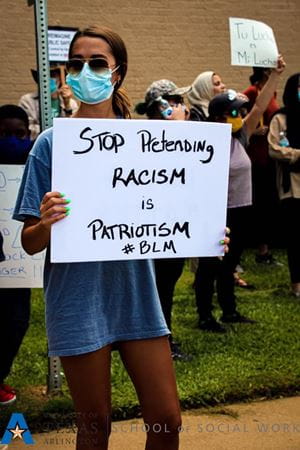 Photo by Valerie Fields Hill
A demonstrator protests police use of excessive force during a Black Lives Matter march on June 8, 2020 at the UTA School of Social Work.

The jury got it right.


Today, after a three-week trial, the jury rendered its verdict.


All 12 jurors, individually and collectively, got it absolutely correct. No doubt about it.


Chauvin, quite simply, snuffed the life out of George Floyd, a father whom he detained for allegedly passing a fake $20 bill in a convenience store.


Floyd should not have died that day and certainly not under the knee of Minneapolis’ “finest.”


As a country, we have to expect better – we have to set the bar higher – for those wearing the blue. They must do their jobs serving and protecting all - equally, fairly and justly.


The longstanding law enforcement culture of shooting first and asking questions later must end. The practice of officers covering other’s lies, unnecessary use of force or refusing to intervene, as was the situation in the George Floyd case, while a person in blue commits murder must cease.


Today’s verdict is a step in the right direction of holding law enforcement officers accountable for their violent acts toward African Americans and other people of color.


No longer can we as a nation, and people of color specifically, suffer the continuous trauma of police shootings of unarmed, young Black and Latino people at such alarming rates for offenses as trivial as an air refresher hanging from a rearview mirror.


We still have a long road ahead in seeing justice reform and further accountability in cases such as Daunte Wright, Tamir Rice, Breonna  Taylor, Sandra Bland, George Floyd and unfortunately so many others. Police restructuring is a must. Community investment is a requirement.


But accountability begins the process.

As a School of Social Work, we are committed to facilitating these efforts and processes by educating students who will advocate for vulnerable populations and supporting faculty who conduct research in racial disparities.


Change begins with each of us.


Scott D. Ryan
Dean and Professor
School of Social Work
The University of Texas at Arlington