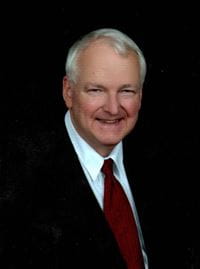 A professor who taught for nearly 40 years in the UTA School of Social Work and wrote defining books on international social welfare, has died.

Thomas Dale Watts, 79, passed away April 14 from natural causes at his home in Irving. A viewing and rosary were held April 18 at Mater Dei Catholic Church in Irving. Family and parishioners held a sung requiem mass Monday, April 19, according to an obituary posted on dignitymemorial.com.

“Tom…served as the director of the Bachelor of Social Work program for many years,” said Debra Woody, senior associate dean of the School of Social Work in an email informing faculty of Dr. Watts’ passing.

“Tom was very outgoing, scholarly and an advocate for students. Those of us who were here with Tom remember him fondly.”

Vijayan Pillai, who joined the School of Social Work in 1999 and worked  alongside Dr. Watts, called him a “scholar with an excellent publication record in the field of social welfare.”

It rose to prominence among social services and welfare textbooks and political science books.

Dr. Watts, Dr. Elliott and Dr. Mayadas collaborated again in 1997 and wrote “The International Handbook on Social Work Theory and Practice.” The book was published by Greenwood on Oct. 30, 1997. It seeks to define global values and a global identity among Social Workers.

It also explores whether a model of international Social Work practice could be applicable across the range of interventions―micro to mezzo to macro, according to a review of the book on Amazon.

“Tom was a giant scholar in the field of Social Work,” UTA Social Work Professor Emeritus Peter Lehman wrote in memoriam to Dr. Watts on the DignityMemorial.com obituary website.

“He had a special bond with Drs. Mayadas and Elliott,” Dr. Lehmann wrote. “They published together having an important and lasting Impact on our profession.”

“His knowledge of Social Work education was extensive, deep, and grounded in both literature and practice,” Dr. Hoefer wrote in an email to fellow faculty members last week remembering Dr. Watts. He added that Dr. Watts had worked post-retirement with the Native American community in Dallas.

Some Social Work faculty remembered a personal side of Dr. Watts. “He was one of the kindest faculty members when I joined UTA,” Dr. Hoefer recalled.

“Tom and I discussed the humble perfection of up-scale vanilla ice cream and how the Kansas Jayhawks were doing in their quest for another year of basketball glory.”

“Watching he and his wife Ilene interact was to see longtime, mature love in the flesh,” he wrote. “We can all hope to be in such a relationship.”

In 1979, Dr. Watts served as chair of the thesis committee in the School of Social Work when Professor Catheleen Jordan earned a master’s degree. Dr. Jordan left, but later returned to the university as a faculty member. Upon her return, Dr. Watts became a mentor, she said.

“I believe he was in the first group - or close to it - of faculty at the new UTA Graduate School of Social Work,” said Dr. Jordan.

“Tom was kind, always interesting to talk to, and humble,” Dr. Jordan wrote. “He was recognized internationally for his work…but never gloated.”

The honor was fitting.

“Our early faculty were stars who put UTA School of Social Work on the map,” Dr. Jordan said.

“We owe a debt of gratitude to Dr. Watts for his contributions to Social Work scholarship and research,” Dr. Scott Ryan, dean of the School of Social Work said. “He is one of the reasons our School enjoys a strong academic reputation and remains ranked among the best in the nation.”

Dr. Watts and his wife Ilene celebrated their 50th wedding anniversary in 2020, according to his obituary. He leaves to cherish his memories, his wife, two children and grandchildren.