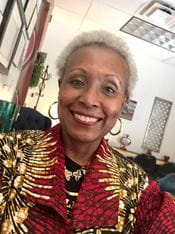 Dr. Pamela Fox, who has researched the connections among race, gender, class and mental health will retire later this month from the School of Social Work.

As assistant professor of practice, Dr. Fox taught Brain and Behavior, Stress, Crisis and Coping, Treatment of Addictive Behaviors, and Seminar in Family Therapy among other courses in the School of Social Work. She began teaching at the university in 2017.

“She has been a wonderful faculty member, colleague, mentor and friend to us all,” Social Work Dean Scott Ryan wrote to colleagues announcing Dr. Fox’s retirement.

“It has been an honor having her as part of our School of Social Work,” he wrote. “Please join me in thanking her and wishing her all the best as she embarks on this next step in her life.

Dr. Fox served for 20 years in the U.S. Navy Reserve Medical Corps as a Navy Social Worker and retired at the rank of Commander. She served in positions such as Mental Health/Behavioral Health Psychotherapist and Clinical Case Manager.

Aside from her instruction and research at the School of Social Work, Dr. Fox is clinical director at Synergy Counseling & Coaching Center in Arlington. The Center offers psychotherapy to individuals and couples. She will continue clinical and behavioral work there, she said.

“I will go into full-time private practice as a clinical psychotherapist, certified life coach and Social Work supervisor in Arlington,” said Dr. Fox, an ordained minister in the United Church of Christ. She also will support faith-based health and wellness initiatives through the non-profit Foxfire Outreach Ministries, which she founded in 2001.

The assistant professor is among five researchers who will leave the School of Social Work in the coming months. Professors Catheleen Jordan, James Langford, Randy Basham and Maria Scannapieco also will retire by August 31, Dr. Ryan announced.

The School will recognize the professors during an end-of-year faculty and staff gathering on May 4. The professors will receive plaques commemorating their years of service to students, the university and the community.

Dr. Fox earned a doctorate degree in Social Work at UTA in 2016. Prior to her doctoral education, she earned a Master of Divinity in Christian Ministry and Pastoral Counseling at McCormick Theological Seminary in Chicago. She also earned a Master’s in Clinical Social Work at the University of Chicago’s Crown Family School of Social Work, Policy and Practice.

Some scholars contend Dr. King’s assassination – and perceptions the U.S. government played a role in the southern minister’s death - caused hopelessness, grief, anger and a distrust of police, federal agents and government among many Black Americans that remain today.

“Following this traumatic community event, I felt a call on my life to serve the community, and particularly Black People of African Descent,” Dr. Fox said.

“I began my professional career as a Social Worker, counselor and case manager in 1975,” she said. “I have been about the business of helping people to help themselves and providing community services ever since, for 46 years.”

Last July, she presented Current Presence of Racism and its Impacts on the Mental, Emotional and Social Wellness of Youth and Communities and Managing its Effects on our Children and Ourselves to the Young Ethiopian American Ambassadors in Richardson.

Three months earlier, in April 2020, as the COVID-19 infection rates soared, Dr. Fox cautioned members of the Maryland-based National Association of Black Journalists, a 3,000-member group of Black reporters, writers, television anchors and others who were continuously reporting on the pandemic, to consider themselves front-line workers – and practice self-care.

Dr. Fox’s departure from the UTA School of Social Work comes at a time when many Black scholars worry universities are losing researchers of color at alarming rates – and not replacing them – leading to concerns, among other things, over too few mentors for college students of color.

According to the National Center for Education Statistics, only three percent of university faculty members across the nation are Black women.

“I am certainly concerned,” Dr. Fox said recently. “However, as a retiring higher education faculty member, as a Black Social Worker and as an African American woman, I trust that I have successfully prepared, mentored, nurtured and taught the next generation of Social Work professionals.

Dr. Fox is a 2021 cohort member of the Association of College and University Educators.

“I am passing the torch to the next generation of Black/African American women in academia and higher education.”

Dr. Fox served on numerous committees in the School of Social Work, including the Executive Committee, Culture and Climate Sub-Committee and the Inter-Professional Continuing Education planning committee. She also was the Diversity Studies Program liaison.