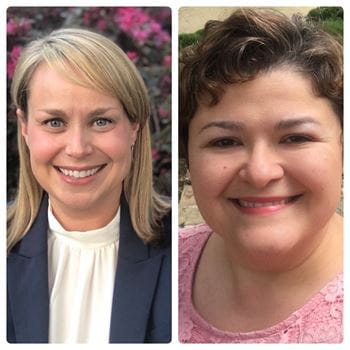 Dr. Regina T. Praetorius, who began teaching at the University of Texas at Arlington in 2009, has been named the Jillian Michelle Smith Professor in Family Violence Research, School of Social Work Dean Scott Ryan said.

Both researchers will assume their new roles on Sept. 1. They will hold the positions for five years, the dean said. The appointments have been approved by both the UTA president and the UT System.

Both professors are expected to lift research in critical Social Work areas that now, more than ever, need to become a part of the nation’s collective conversation, Dr. Ryan said.

“I am very proud of these two faculty members and all they have accomplished to be eligible and selected for these esteemed roles,” the dean said. “I look forward to how they will use the professorships and the resources awarded to further their work and its impact.”

Dr. Praetorius is co-founder of Local Outreach to Suicide Survivors (LOSS) in Tarrant County. She is also the director of graduate programs at the School, overseeing the top-ranked Master of Social Work program.

From 2015 to 2017, the latest years for which statistics are readily available, the county logged more suicides in July than in any other month during those years, according to the county Public Health Administration. In 2017, there were 257 suicides among Tarrant residents, the health administration reported.

The Smith Professorship is named after rookie Arlington police officer Jillian Michelle Smith who was shot and killed Dec. 28, 2010, after she responded to a call for assistance during a domestic violence dispute at a local apartment complex. While Officer Smith was taking a report, the victim’s former boyfriend unexpectedly returned. The man began firing and Officer Smith placed herself between the victim’s 11-year-old daughter and the gunshots, saving the girl but Smith received fatal gunshot wounds. The man then shot and killed his former girlfriend and himself.

Officer Smith had graduated a year earlier from UTA with a degree in Criminology and a minor in Sociology. She graduated from the police academy two weeks prior to her death.

Dr. Fields is an associate professor and gerontology health researcher. She joined the UTA faculty in 2013 and will assume the Roy E. Dulak Professor in Community Practice Research position. Dr. Fields has conducted significant research in aging, Alzheimer’s and dementia-related disorders.

She and a fellow Social Work colleague, Dr. Ling Xu, together with a team of engineering and theater arts professors, studied interactions between aging adults using a robot who recited some of Shakespeare’s more noted sonnets to older adult volunteers. The team discovered after only three weeks of interactions, the incidences of depression among the older adults dropped significantly.

Dr. Fields has also received grant funding for her interdisciplinary work related to mobility in later life and how transportation intersects with health, aging, and well-being. With this professorship, Dr. Fields is expected to devote more time to similar research in issues affecting aging adults.

“At the heart of my scholarship is a commitment to partnering with individuals and organizations on community-engaged research that has the potential to make a larger impact,” Dr. Fields said.

“It is an honor to have this opportunity, and I look forward to focusing on collaborative, interdisciplinary approaches to community practice that are aligned with the priorities of the Roy E. Dulak Professorship.”