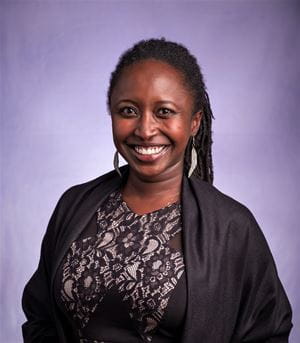 A Social Work undergraduate student is among a team of international scholars and social justice advocates who will speak during a national symposium this weekend on Rwanda and its refugees.

Alice Muhindura will facilitate a panel discussion and share her lived experiences escaping Rwanda during the 2021 Rwandan American Symposium. It will be held virtually on Saturday and Sunday.

This weekend marks the first time Muhindura will speak publicly about her family’s experience being forced from their home in May 1994, crossing the border into The Democratic Republic of the Congo and, finally, being airlifted out of the region to safety.

“I don’t really think I’ve talked about it,” said, Muhindura, a senior Social Work major earning a minor in neuroscience. “I want to kind of share that with the world.”

Thousands of Rwandans escaped the nation during 1993 and 1994. The country engaged in a civil war that saw an estimated 1.1 million ethnic Hutu, Tutsi and Twa people killed in what is widely viewed as one of the worst genocides in world history.

This weekend’s symposium will offer attendees a history of Rwanda, a small nation in Central Africa bordered by the Congo, Burundi, Tanzania and Uganda.

Organizers say the conference is being held to address injustices surrounding prosecutions of international war crimes. “We wanted to highlight or showcase the injustices that are still prevailing,” said Muhindura, who plans to graduate in May.

Unresolved prosecutions from the Rwandan civil war and genocide have a lingering effect on the mental, emotional and social health of Rwandan refugees, she said.

Among the Symposium’s highlights are:

Sunday’s Symposium events will focus on mental health and emotional healing among Rwandans, particularly those who resettled in the United States, apart from extended family members and others who might offer cultural connection, identity and emotional support.

“This year, we chose the theme “27 Years and Counting,” said Muhindura, who is 38, and came to the United States as a preteen with her siblings, mother and father, a former high-ranking Rwandan military leader.

“It’s been 27 years since we all were refugees. We just kind of wanted to check in.”

On Sunday, clinical psychologist Dr. Albine Bismana, herself a Rwandan refugee, will address war-related traumas including sexual assault and child abuse. Dr. Bismana has worked in community psychology and university counseling settings and in acute psychiatry, according to organizers.

Another session on Sunday will feature Silvie Sibomana, a family nurse practitioner and hospitalist who specializes in addiction medicine.

The 2021 Rwandan American Symposium is a free and open to the public but requires tickets and registration. Tickets can be obtained on Eventbrite by clicking the link below: