Diana DiCesare won the North Central Texas Fort Worth Branch of the National Association of Social Workers “MSW Student of the Year” award. She was recognized by the organization’s members March 24. 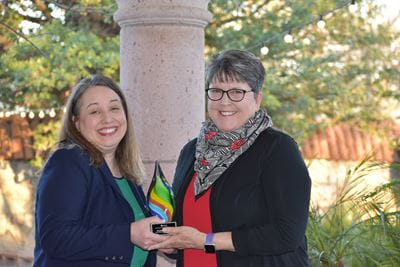 DiCesare was among two UTA-affiliated individuals who were lauded by the professional Social Workers group. North Central Texas Fort Worth Branch is one of 26 local units of the Texas Chapter of the National Association of Social Workers. The Texas branches represent about 5,000 professional and student Social Workers.

Dr. Jan Finch, an adjunct associate professor of practice and a clinical therapist, was recognized with the “Lifetime Achievement Award,” one of the organization’s most prestigious honors for professional Social Workers.

Dr. Finch retired as a full-time associate professor of practice from the UTA School of Social Work in 2019 but returned as an adjunct professor the following year. She has worked for more than two decades as an advocate and family home studies researcher supporting international adoptions, particularly of children in Ukraine.

“I have been most thankful for my work in international adoption,” she said. “I’m responsible for placing 10 Ukrainian children in permanent homes in the United States.”

“I really worry about the ones that we still have there,” she said.

In the early 2000s, at the peak of international adoptions between U.S. families and orphanages in Russia, China, South Korean, Ethiopia and Guatemala, many Social Work and human rights advocates facilitated searches for permanent homes. Their work required extensive knowledge of international law, cultural traditions and expectations and religious sensitivity, among other factors. 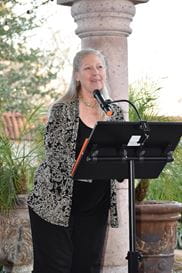 Dr. Finch’s work with families often required teaching them to navigate norms that were different than those they practiced in Western countries.

“There’s a lot of politics involved in this,” she said.

“I’m just so proud of these families that reached out and brought these children to the United States.”

Dr. Finch also worked for years advocating for pets as therapy animals for those suffering from anxiety, depression and other disorders.

In the coming weeks, she plans to head to the Texas-Mexico border with a therapy dog to visit children held in immigration centers and the professionals who work with them.

Dr. Finch and DiCesare both were recognized during an evening banquet on Thursday, March 24, at Joe T. Garcia’s Mexican restaurant in the Fort Worth Stockyards district.

This is the second consecutive year in which UTA Social Workers and Social Work students were honored for outstanding achievements in the field.

Last year, Kiva Harper, a therapist and associate professor of practice, won the branch’s “Social Worker of the Year Award.”

Additionally, Dr. Catheleen Jordan, a UTA Social Work professor emerita, was named a “Pioneer” by the national organization. Thursday night she and Professor Harper were both mentioned for, among other things, outstanding research and other achievements, respectively.

DiCesare said she was surprised to have earned the MSW Student of the Year Award. “I was completely surprised,” she said.

“It says a lot about (UTA’s School of Social Work) faculty,” she said. “Having faculty that connects with students and submits nominations for students, I think that’s pretty cool.”

It was the latter setting in which DiCesare, who had already earned a bachelor’s degree in biology, was inspired to pursue Social Work after she worked more than three decades in the pharmaceutical industry.

“I started meeting Social Workers in the field of oncology through my job,” said DiCesare, who is almost 60. “I was just in awe of people doing Social Work. I (now) want to be able to help people during health crises, like a cancer diagnosis.”

DiCesare was honored for her ongoing work at as a graduate field student at a Fort Worth oncology center.

She also advocated against insensitive treatment of marginalized students in her Northeast Tarrant neighborhood and school district. Through the pandemic, she worked to increase awareness and membership in the Healthcare Social Work student organization and in Phi Alpha, the Social Work honors society.

DiCesare will graduate in May.