Located in the heart of the Dallas/Fort Worth metroplex, UT Arlington is a modern 420-acre campus a few blocks from downtown Arlington. In addition to campus activity, the area provides a full range of interests including museums, concerts, ballet, theater, family amusement parks, and professional baseball, basketball and football.

Through the financial assistance of the Texas Graduate Nurses Association, courses for graduate nurses were first offered in 1930 in the Department of Physical and Health Education of the School of Education at the University of Texas at Austin. In 1940 a complete curriculum was established leading to the degree of Bachelor of Science in Nursing Education. Funds for the support of this program were given to the University of Texas Graduate Nurses Association in the form of a scholarship fund to be used for Texas nurses. In 1945 this curriculum was transferred to the Medical Branch administration, bringing both the John Sealy College of Nursing and the newly created Department of Nursing Education together to form the School of Nursing with its own Dean. In September 1949, a curriculum leading to the Degree of Bachelor of Science in Nursing for graduates of diploma programs was established.

Through the generosity of the W. K. Kellogg Foundation, a program leading to the Master of Science in Nursing with a major in Nursing Service Administration was offered in 1952. Participating in the program of the Southern Regional Education Board for Graduate Education in Nursing, the School of Nursing first offered additional specialization in 1955.

In 1957 the School of Nursing admitted the last class to the diploma program. Since that time, it has offered one basic program leading to a Bachelor of Science in Nursing.

In the fall of 1960 Austin became an extension campus of the School of Nursing which was still headquartered in Galveston, and nursing courses were offered on the Austin campus for the first time. 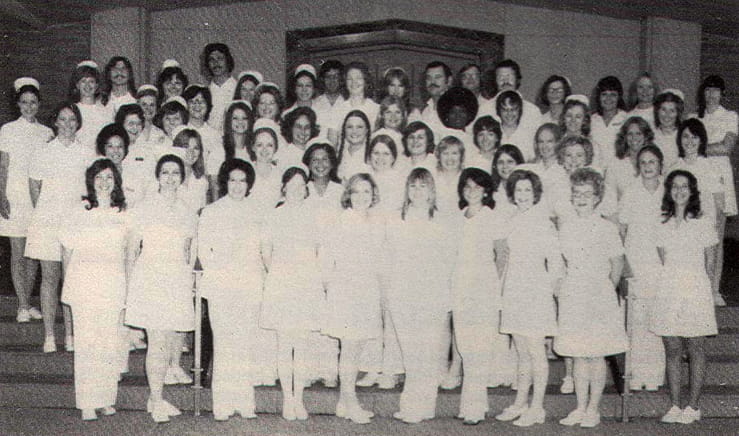 In March of 1976, the Board of Regents of The University of Texas made each of the System Schools a part of the nearest University of Texas institution. Thus, as of the first of September 1976, the Fort Worth campus became The University of Texas at Arlington School of Nursing (UTASON), and in September 1977, the School of Nursing physically moved from Fort Worth to the UT Arlington campus and into the Business Building. In Fall 1982, the school moved into a 14.2 million dollar, 154,000 square foot Nursing Building. In 1995, the building was renamed Pickard Hall to honor the founding dean, Dr. Myrna Pickard.

After Dean Myrna Pickard’s retirement, Dean Elizabeth Poster and a team of Associate Deans, Program Directors, faculty and staff continued to build on the School’s history of innovative growth and development. Within an environment of collegiality, faculty embraced new technologies to enhance classroom and clinical teaching.

In August 2002, the UTA Graduate Assembly, and the UT System Board of Regents approved the creation of a PhD program to prepare nurse scientists and increase the number of doctorally prepared faculty to meet the health needs of a rapidly changing and culturally diverse society. The Texas Higher Education Coordinating Board then approved the PhD in Nursing program to begin in Fall 2003.

In 2005, the School of Nursing opened the first phase of the Smart Hospital - a virtual emergency department training facility located on the first floor of Pickard Hall. This department was the first of its kind in the nation, and featured 27 manikins (simulated patients), task trainers and computer simulations of patient conditions and nursing interventions to educate students in acute, trauma, emergency, intensive and primary care interventions. The School was designated as a Laerdal Center of Excellence, the sixth of Laerdal Medical’s national Health Care Education sites dedicated to simulation-based education, training and research.

With funding from The University of Texas System ENTER program and a grant from the Amon Carter Foundation, the School purchased the Pachl Office and Classroom Annex buildings, which became the new home of the Smart Hospital in spring 2007. The more than 13,000-square-foot, two-building complex houses state-of-the-science patient care units such as an emergency department, intensive care unit (ICU), labor and delivery, pediatrics and medical/surgical rooms with infant, child, adult and birthing manikins, as well as trained actors who play the role of patients and family members.

In January 2010, the University of Texas System and the Higher Education Coordinating Board approved a change from 'School of Nursing' to the College of Nursing.

In a press release announcing the change:

“UT Arlington Provost Donald R. Bobbitt said that when a school grows to the point that it has multiple departments and grants several different degrees, the school can apply to the Coordinating Board to be designated as a college.“It was a logical progression for nursing,” Bobbitt said. “Their growth over the past few years has been simply phenomenal.”

The accelerated online BSN program was initiated in 2010 with 40 students admitted that spring. By 2012, the College’s enrollment was over 7,500 students in BSN, RN‐to‐BSN, MSN, Post‐MSN, DNP and PhD programs.

June 1, 2013 marked a change in leadership for the College, when Dean Elizabeth Poster stepped out of her leadership position. For the next year, Dr. Jennifer Gray served as interim dean until Dr. Anne Bavier was named Dean of Nursing in 2014, ushering in a new academic year under her leadership.

The department was dedicated to teacher education for over two decades, but in the last 30 years has grown significantly and expanded to other health fields: Exercise Science (1995), Athletic Training (2000), and Public Health (2017). The Master of Science program initiated in 2003, and the Ph.D. in Kinesiology started in 2016. Today, the Department of Kinesiology continues to grow programs and tracks to meet the need for health and exercise professionals in the area. With a BA in Kinesiology (Physical Education Teacher Education; Sport Leadership and Management), a BS in Exercise Science (Clinical and Applied Physiology; Health, Fitness, and Wellness; Motor Rehabilitation Sciences), a BS in Public Health, a MS in Exercise Science, Athletic Training, and Public Health, as well as a PhD in Kinesiology, the department brings an unique contribution to CONHI by allowing students to explore a variety of areas related to health and disease prevention and rehabilitation, as well as prepare for several careers in health-related fields.

By 2014, the College was the largest producer of baccalaureate educated nurses in Texas, and the largest not-for-profit college of nursing in the United States. Under the leadership of Dean Anne Bavier, the College was designated a Center of Excellence by the National League for nursing, one of only 12 nursing schools in the country to earn the designation in 2015. That same year, Dean Bavier was installed as president of the NLN, where she served until 2017.

Dean Bavier announced her retirement in 2018, and Dr. Elizabeth Merwin became the current dean of the College in spring 2019. She joined UTA after serving as the Duke University School of Nursing’s executive vice dean. With her leadership the College continues to build upon the positive national reputation it has earned.

In 2019, CONHI was once again named a National League for Nursing Center of Excellence, and in 2020 received its third distinction in recent years. Also in 2020, the College became a member of the National Hartford Center of Gerontological Nursing Excellence.

Between 2010 and 2020, the College’s nursing programs saw extensive growth. Across all nursing programs, enrollment grew from 6,300 to over 25,000 students, quadrupling in just that short time. BSN enrollment increased by over 5,000 students, MSN by nearly 6,000, and RN to BSN by over 8,000. Much of this growth is attributed to the addition of accelerated online programs in the College.

The College continues to see strong enrollment and graduation rates annually. In Academic Year 2019-2020 over 27,000 students were enrolled and over 5,500 graduated from the College.

For over nearly five decades, the UT Arlington College of Nursing and Health Innovation has grown and developed into a nationally recognized program. CONHI has and will continue to be relied upon as a leader in health and the human condition in each of its undergraduate and graduate programs. We look forward with great pride to a future that is built on a strong foundation.